During a particular window each month, hundreds of box jellyfish can be found on Oahu’s south-facing beaches.

The beaches of Hawaii, despite their numerous charms, are sometimes not all fun and games. You may have seen beaches, or even popular Oahu snorkeling spot Hanauma Bay warning visitors not to swim because of jellyfish. This safety measure, though an inconvenience, is actually not that unusual of an occurrence. 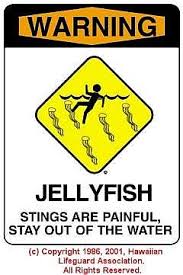 At least three species of box jellyfish, named for their top bell with four distinct corners, are known to live Hawaii’s waters. And, on Oahu’s south-facing beaches, inshore numbers of these translucent invertebrates pulse monthly as they head into shallower waters to spawn.

According to the Waikiki Aquarium, the swarming phenomenon of box jellyfish was first reported in 1988, though may have been occurring for many years prior. The prevailing theory for their regular appearances? Box jellyfish reproduce under certain lunar and tidal conditions. They will mate beyond the reefs at night a few days after the full moon, but appear inshore after nighttime high tides recede, leaving them trapped along the beach.

During a particular window each month, hundreds of box jellyfish can be found on Oahu’s south-facing beaches. The book Hawaii’s Sea Creatures: A Guide to Hawaii’s Marine Invertebrates, tells the tale of one fateful day in Waikiki when as many as 800 people sought medical attention for box jelly stings. Rarely, other parts of Hawaii will experience box jelly invasions as well. This weekend’s inshore population surge—possibly because of windy weather—extended as far north and west as Kailua Beach.

How to avoid box jellyfish and what to do if you’re stung:

Though they pack a less potent punch than box jellies in other parts of the world, Hawaii’s species can still deliver a painful and serious sting. Their tentacles, like their relative the Portuguese man-o’-war, are lined with stinging cells used to capture prey. Each cell fires a toxin-dosed barb that can penetrate the skin, which causes the singing sensation.

The best way to avoid box jellyfish stings is to stay out of the water when warnings are posted. But, because jellyfish are present in Hawaii’s waters year-round, there is no guarantee of avoiding an encounter altogether.

If you are stung, experts recommend rinsing the area with salt water before pouring vinegar on the sting to deactivate any of the remaining toxin—pouring freshwater or putting sand on the cells may only irritate live cells and cause inactivated barbs to dig in. Lifeguards posted on many Hawaii beaches will have vinegar or a similar remedy onhand. Avoid touching the area before being treated, the cells can be transferred and all parts of the jellyfish, including the bell, can potentially sting. Remove any tentacles or jellyfish parts with a stick other object. Ice packs usually help reduce inflammation following a vinegar treatment. It may take about an hour for the stinging sensation to subside, and there may be a retained mark on the skin. If you have been stung and experience a more severe reaction such as difficulty breathing, problems with vision, cramps or palpitations seek emergency medical treatment immediately.

Though they can be fearsome, box jellyfish are actually quite remarkable creatures. These jellies have a more developed nervous system than most, a nerve ring coordinates the pulsing movement of the top bell. This helps to explain why box jellyfish are also relatively fast swimmers—some species have been clocked swimming up to twenty feet in a minute. Box jellyfish are also unique in that they have developed true eyes—clusters of them are located on each corner of their bell—that can sense points of light. An Australian species of box jellyfish (pictured above) is among the most venomous and deadly marine creatures in the world.